What can you do with a fox painting? Of course, you could get prints made. Even lampshades, But here is something different, You can now find one of my most popular fox paintings on neckties. 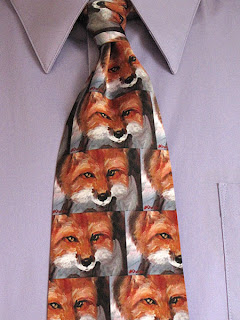 Red Fox Necktie $49.95
as usual, shipping included.
Posted by Stephen Filarsky at 5:28 PM No comments: Links to this post

In the last post, I told you about the Blowing Rock Charity Horse Show. In the last two months I have also been busy doing something else that I love to do. Gold leaf and hand lettering names of boats.

The first two boats are Lightning Bugs, electric boats from Budsin Woodcraft. The ideal boat for a sunset cruise around the lake, quiet enough to hold a conversation whilst sipping some champagne. 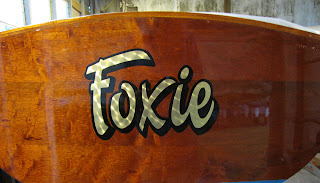 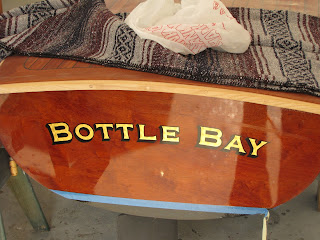 Next are two videos of lettering on two Chris Craft boats. The first is a 1947 model. Since it is a post-war boat, it is considered a Classic. This is the same type of boat as seen in the film "On Golden Pond"


This next boat is a 1931 Runabout. Since it is a pre-war boat, it is an antique. Both of these boats will be at the Antique and Classic Boat Show at Lake Wheeler in Raleigh, NC on Sept. 25th. I will have photos of them in the water afterwards.
For information on the boat show go to VintageBoat.org

Here is Indiscretion, a 1964 35' Fino Runabout a classic Italian boat built along the lines of the Riva Aquarama. She was lettered after a new paint job. The work was done while she was getting her bottom paint and final fitting out. In the photo below she has not yet gotten her teak rails and chrome lights. The lettering and transom will be getting a coat of clear awlcraft. The reflection on the swim platform was accomplished by wetting it down to simulate the final look. The final paint was incredible. The entire boat and everything in it was painted, then sanded with 1500 grit sandpaper and finally buffed out to a mirror finish. The second photo is a look at the bow inside the paint booth and shows off her lines. Just the boat to be scooting about on the Riveria in the early sixties.
December 2011-CORRECTION-I received an email from a Fino owner who has actual facts:
I happened upon your blog entry from last year regarding this boat. I am a Fino owner myself, and have been assembling information about these boats, including the current whereabouts and condition of the various individual examples. Contrary to your post, these boats were actually built in Florida between 1970-1973, and approximately 28 were constructed (mine was #9). The design is certainly influenced by the Italian "Riva", but the designer was Walt Walters, who designed many well known offshore race boats in the '60s and '70s. 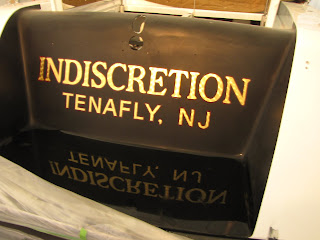 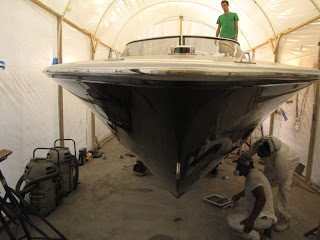 In the next post you get a look at one of my painting workshops that was held a Jerry's Artarama Raleigh Store
Posted by Stephen Filarsky at 9:05 AM No comments: Links to this post

Sign up for Email reports on One Hundred Paintings Links to my Websites